Pregnancy is one of the most wonderful and fulfilling life experiences! However, as delightful of a time it may be for the mother-to-be, she must be aware that the changes occurring throughout the pregnancy can affect her oral health.

Dr. Kalantari, of Smiles on Bristol Dentistry in Santa Ana, says the most notable change in a female’s body during the start of pregnancy is the increase and change in hormones. “These hormonal changes can lead to an increase in estrogen and progesterone that directly affect her oral health.”

Studies show one of the most common oral hygiene issues women experience is pregnancy gingivitis. Almost all pregnant women will experience some form of gingivitis during their nine months of pregnancy. Generally, it begins in the second month. The mouth and gums of a healthy adult, who is not pregnant, handles gingivitis differently than an adult who is expecting. The hormonal changes can cause the expectant mother’s mouth to deal with the plaque buildup on the teeth differently, ultimately irritating the gums. The hormonal changes exaggerate the body’s reaction to the plaque, which is why pregnancy gingivitis is so common. Symptoms include red, inflamed or bleeding gums.

The best time to schedule the first dental visit during pregnancy is between the fourth and sixth months. Typically, the first three months of the pregnancy do not require specific dental attention. It’s best to notify your dental office of the pregnancy prior to the visit so the doctor is fully prepared. As always, if a patient has any concerns they should inform their doctor, to determine the best coarse of action for them.

Dr. Kalantari also warns expectant mothers that they should not ignore the symptoms of gingivitis. The bacteria from the gingivitis can enter the mother’s bloodstream through her gums. From there, the bacteria makes its way through the uterus, triggering multiple hazardous scenarios for the baby. Premature labor and a low birth weight are both caused by untreated gingivitis. The staff at Smiles on Bristol is available six days a week to help you schedule an appointment! Give them a call to plan your next visit to prevent pregnancy gingivitis. 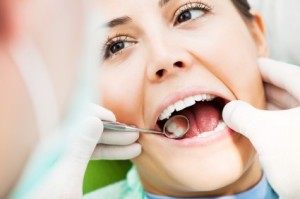