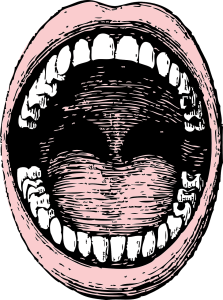 Dental experts, including dentists Dr. Kalantari and Dr. Arcila of Smiles on Bristol Dentistry in Santa Ana, Ca, know that getting patients to floss is an uphill battle.  According to a recent survey by Harris Poll as requested by the American Academy of Periodontology, 27% of adults lie to their dentists about flossing.  Only approximately 15% of the population actually regularly flosses.  Unfortunately, skipping flossing can lead to gum disease.  According to the CDC, approximately half of adults over 30 have some form of gum disease.  For adults over 65, that number jumps to 70%.

Why should people worry about a disease that is so common in the population?  Most people with periodontal disease have gingivitis but do not develop past that point.  Gingivitis is characterized by red, swollen gums that have a tendency to bleed during brushing and flossing.  On its own, gingivitis generally does not cause too many issues for a person.  However, people with gingivitis have a much greater chance of developing a worse form of periodontal disease.

Additionally, as gingivitis is an infection of the gums, this means the body’s immune system is in a constant battle.  Chronic usage of the immune system has been shown to reduce its effectiveness.  When studying persons with chronic infections, researchers have found that, while they have an increase in white blood cells, the white blood cells do not stay with the place of infection.  The longer an infection has been going on, the more the white blood cells leave the infection and appear to wander the body not doing much of anything.  This means that for people with chronic infections, their immune system no longer fights the original infection with vigor, but also that the body gets worse at knowing how to tackle infections overall.  This may contribute to why people who suffer from poor dental health also seem to struggle with worse health overall and an increased risk for heart disease and endocarditis.

For people who contract full periodontal disease, serious complications can occur.  Periodontal disease breaks down the gum and attacks the bones of the mouth.  This can lead to receding gums, tooth loss, and infections and loss of the bones.

Besides poor home dental care, risk factors for periodontal disease are genetics, smoking, stress, diabetes, alcohol use, crooked teeth, auto-immune disorders, dry mouth, and female hormone changes.  Most people are aware that smoking causes huge damage to the mouth, but a recent study by Brazilian researchers shows that alcohol use, too, can hugely impact the mouth.  The study found that the frequency of alcohol consumption systematically matched an increased rate of periodontal issues.

For gingivitis, most dentists will simply prescribe their patients a specific at-home care routine and recommend patients continue routine dental visits to monitor the condition.  For more advanced conditions, dentists may recommend a scaling and root planing procedure.  This procedure refers to deep cleaning under the gum line.  Dentists will “scale” the teeth, that is, they will scrape off stuck on plaque from below the gum line.  Root planing then smooths gritty areas on the teeth to eliminate places for bacteria to gather.  Sometimes the deep cleaning is all that is required. In other instances, dentists will place antimicrobial medicine in the space between the tooth and the gum, called the gum pocket.  This medicine helps to kill any remaining bacteria and promotes healing of the gum pocket.

For patients where deep cleaning and medicine is not enough, surgery is usually required.  One such surgery is called flap surgery.  Dentists will pull back the gum line and clear out hard to reach plaque.  Once the area is cleaned, they will suture the gums back to the teeth to return gum pockets to a healthy size.  For patients with bone or gum damage, dentists may also recommend bone or tissue grafts to replace lost tissue and encourage new tissue growth.

For anyone curious as to whether to floss before or after brushing, studies show that there is not conclusive data to prove one is better than the other.  Some dentists recommend that patients floss before they brush to get it out of the way.  Since a lot of people thoroughly dislike flossing, this forces them to get it done first.  Other dentists recommend patients floss after brushing because there is a possibility that this will help push toothpaste into the hard-to-reach places of the teeth to keep them better protected.  Because when people floss does not have significant impact, the dentists at Smiles on Bristol Santa Ana Dentistry simply recommend patients find a routine that works for them and stick with it.

Scientists have also been working hard to find new ways to treat and prevent gum disease.  Researchers in Shanghai, China, have been experimenting with a derivative of graphene called graphene oxide.  They conducted the study in search of new antimicrobial substances to combat the rise in antibiotic-resistant bacteria. Studies used graphene oxide in carbon nanosheets placed on infected areas.  The studies showed that graphene oxide was able to help kill and effectively prevent new growth of a variety of bacteria that plague the human mouth without causing damage to the human cells.

Additionally, researchers at the University of Michigan have discovered that the enzyme, Arginine, an essential amino acid, helps to fight cavities and gum disease.  Although researchers are not sure how, it appears arginine helps to get rid of dental plaque.  Scientists believe it works by somehow disrupting the way plaque naturally functions and keeps it from sticking to the teeth, thus preventing it from doing damage.

Periodontal disease is a serious issue that should not be ignored.  The best way to know if you are suffering from periodontal disease is to stop in to your local dentist’s office and ask for a screening.  For people in the Santa Ana area, the dentists at Smiles on Bristol Dentistry are highly trained at spotting and treating periodontal issues.